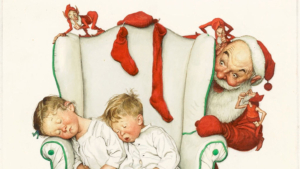 Santa Claus is fairly recent entrant on the Christmas stage. At least compared to some others nominated for induction into the Christmas Hall of Fame. His actual date of origin cannot be definitively determined. But for well over 200 years he has been at the center of that Christmas stage.

As Dutch and German immigrants settled into the North Eastern United States they brought traditions of St. Nicholas with them as they celebrated Christmas.

Their images, their customs, their names and their traditions for St. Nicholas all varied just a little. But artists looking to unify the community by quelling the raucous celebration of Christmas on the streets (especially in New York City and in Philadelphia) looked to St. Nicholas as a symbol of what Christmas could be: peaceful, giving, and joyous.

While evidence suggests several works that attempted to unify the image of a Christmas gift-bringer there is one poem that delivered on that hope and gave rise to the individual we now know as Santa Claus.

That poem was A Visit from St. Nicholas, a little work written by a father on Christmas Eve for his children. He was a distinguished man of education. He never intended for the poem to be used outside of his family. His name is Clement Clark Moore, and he too, because of his poem, is nominated for the Christmas Hall of Fame.

In this first episode of the Christmas Hall of Fame podcast we explore the impact of Moore’s poem and the stature it created for the man most just call Santa.

He is recognizable around the world instantly. He beloved by millions.

Santa Claus had the good fortune of coming to the public mind during a time of media explosion. First he was known in print, then in painted art, and then in song. For more than 30 years after the first publishing of Moore’s poem, he enjoyed a kind of singular Christmas existence — he was for the children.

But as his traditions and the stories of him expanded into music, then recorded music and finally into film making that would take him from the Silver Screen to every small screen now available today, Santa’s influence has been unstoppable.

Merchants and marketers use him as a salesman. Parents use him to create Christmas magic. Historians use him as an example of how media has spread influence.

Thankfully, we have a solid record of nearly two-hundred years of Santa’s goodness. His generosity, creativity and influence for good have been documented by young and old alike for generations.

He is one of the more enduring elements of Christmas. He is modernized by art yet at the same time honored as tradition. He occupies a unique place in the history of Christmas.

~ About the Christmas Hall of Fame Podcast ~

This first episode of the Christmas Hall of Fame Podcast begins a new level in our outreach for more votes.

Each episode will focus on nominees. But we do not want the voices heard to be ours alone.

We invite podcasters, historians, radio DJs and other interested parties to voice these episodes or to lend their own podcasts in support of candidates for the Christmas Hall of Fame.

The Christmas Hall of Fame is all about the voice of those who celebrate Christmas.

We believe in the years ahead we can make an impact on the history of Christmas by documenting Christmas in this way — through the voice of the people. If you vote, you let future generations know just the who, what, when and where of Christmas that our generations wanted remembered.

We hope you make your voice heard first by voting — and then by sharing the efforts we make here, including the Christmas Hall of Fame Podcast.