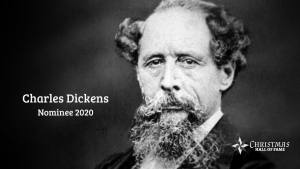 Charles Dickens has a most amazing run in the history of Christmas. His greatest Christmas work, A Christmas Carol, has seen continuous play on stage, on film and in print since December 1843.

How many other literary works can you think of that has that kind of history, popularity and staying power? And that’s the thing: we see no end to his run.

Charles Dickens is as worthy of a candidate for the Christmas Hall of Fame as anyone.

~ The Beginnings of Charles Dickens ~

He was born at just the right time, in just the right place and his career followed an arc in the emergence of publishing technology that made it possible for Charles Dickens to become the first media superstar of worldwide acclaim.

Born in 1812 Dickens enjoyed a pleasant childhood before things took a devastating turn for his family: his father was cast into debtors prison. Young Charles and at least one of his siblings had to find employment in order to help the family survive. He began work at the tender age of 12 at the peak of work abuses to both adults and children at the beginning of the British industrial revolution.

His experiences between the ages of 12 and 20 would color the pages of his later written works. Just as he wrote in A Christmas Carol, the themes of ignorant, poverty, want and neglect were ones he would not shy away from.

Dickens had developed a love of theater, attending frequently and dabbling here and there in acting. He was well known among his friends and work associates as clever, funny and a great mimic.

These were passions he quite nearly pursued as a career. But along with his scholarly pursuits came a course in a system of shorthand that proved useful to journalists. He worked for a time as a political reporter then as a columnist and satirist penning a regular column detailing fictional story lines.

This was where the writer in Dickens began to flourish and before long his works of fiction in England’s press began to develop a lucrative following. He began to publish and soon was one of England’s leading authors. He married and started a large family.

As he matured he naturally did battle with publishers, who he felt were taking more than their fair share of the profits. Some historians portray Dickens as nearly broke and desperate when he wrote A Christmas Carol in 1843. This is a distortion. While Dickens was at a career crossroads at about the age of 30 he was also in need of finding more profitable shares of his creations. Due to a dispute with a publisher, he decided to self-publish A Christmas Carol.

Self publishing didn’t pan out for the first edition of A Christmas Carol but it did in subsequent editions. In fact, it took Charles Dickens and his family to a whole new level financially and that changed both his outlook and his economic prospects.

A Christmas Carol made him permanently viable and made publishing everything else he would create in the future easier. Dickens went on to a successful and lucrative career as one of the biggest literary stars of the 19th century.

But it was A Christmas Carol that defined him both in his time and in ours. For the rest of his life he would tour frequently, “doing readings” of his work which meant acting out the characters in different voices and mimicking their behaviors. Here is one review of a performance of Charles Dickens performing A Christmas Carol: 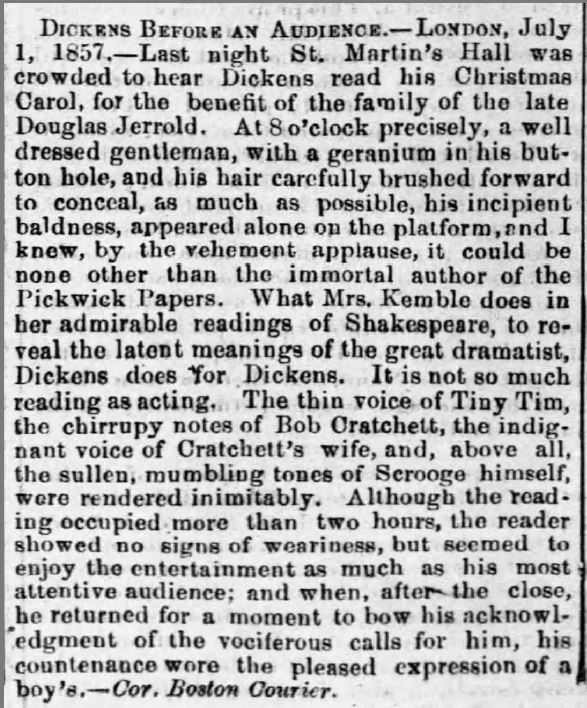 By the time Dickens died in 1870 he was a superstar on both sides of the Atlantic. Christmas simply was not Christmas without Charles Dickens.

That is still true.