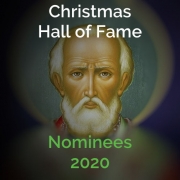 Like every other Hall of Fame out there the first inductees go through a unique process. It will seem to some that we have missed the obvious while others will say why don’t you just induct them all.

To all this we just say “ya gotta start somewhere”.

So as you read about our nominees for 2020 induction we want you to realize a few things:

First, not all of them are going to make the first cut.

Our voting criteria — which is more critical in future years than in this first year — stipulates that in order to be inducted a nominee has to be a top 10% vote getter in their category.

As you see below, we have two Historical Figures, three fictional characters, two writers and one each of an actor, entertainer and artist.

Out of a list of ten no-doubt-about-it hall of famers a few of them are going to be shut out. Your votes will decide that.

Second of all, this initial class will be very small compared to what is coming for 2021. As we give folks a full year between now and Thanksgiving 2020 we anticipate filling every category we now have with nominees. The voting page will look huge next year.

It’s going to be fun.

Here are the nominees, in no particular order, for 2020. You should know them all:

Much is going to be share here about these ten sure-fire hall-of-famers this year. We expect to have a number of experts weigh in and we’re hoping for lots and lots of votes.

When we pull the curtain back after the votes are tallied and announced for Thanksgiving 2020 we will find what our true “first class” really is — and where we go from there. We hope you join us.