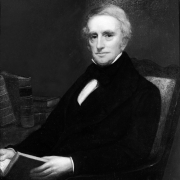 Clement Clarke Moore is the author of A Visit from St. Nicholas, a poem created in the early 19th century that is largely credited for creating the modern legend of Santa Claus. The poem is sometimes referred to by its first line: ‘Twas the Night Before Christmas. Moore was nominated for the Christmas Hall of Fame in 2019. Click here to vote. 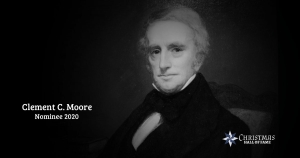 Clement Clarke Moore was born in 1779 in New York City. His family heritage is steeped in American history and famous for embracing patriot causes. His father was Bishop Benjamin Moore, head of the Episcopal Diocese of New York. His mother was Charity Clarke Moore, who inherited a large family estate that in later years would be known as the Chelsea district of New York.

Clement Moore would go on to a career as a professor of Oriental and Greek Literature. He was devoted to his church and was very involved in New York society and politics. His inheritance would likewise impact the development of New York City and his substantial wealth. Moore was an early real estate developer in New York.

He married Catherine Elizabeth Taylor in 1813 and together they raised a large family of nine children.

~ The Backstory of A Visit from St. Nicholas ~

On a snowy Christmas Eve around 1820 Clement Moore was delivering turkeys to the poor at the behest of his wife. Driving his sleigh was a rotund man with a long white beard. To Moore, he was the very image of the legendary figure of St. Nicholas, a character of legend he learned of from his friend, Washington Irving, an American writer and fellow New Yorker.

Both Irving and Moore were politically active in the affairs of New York City. One of the lingering issues in the city was the tradition of violence and unrest on the streets during the celebration of Christmas.

Already a melting pot of languages and cultures, the people of New York tangled over their beliefs and traditions associated with Christmas. Older generations of Puritan stock eschewed the observance of Christmas while immigrants from Germany, Denmark and other European homelands still embraced the more raucous traditions for which Christmas was known for centuries.

Irving promoted the idea and wrote that the Dutch tradition of St. Nicholas, a character whose exploits for good causes were so famous he was known around the world long before the age of printed works, that Christmas needed to be observed as a day of quiet celebration and reflection. The New York populace, thanks to its immigrant citizenry, embraced the idea of St. Nicholas.

Moore wrote the poem for his children, using the imagery of that snowy day and of the jolly driver of his sleigh to borrow from the legend of St. Nicholas. Later that Christmas Eve night he shared the poem with his children, who were thrilled with it.

‘Twas the night before Christmas, when all through the house
Not a creature was stirring, not even a mouse;
The stockings were hung by the chimney with care,
In hopes that St. Nicholas soon would be there;
The children were nestled all snug in their beds;
While visions of sugar-plums danced in their heads;
And mamma in her ‘kerchief, and I in my cap,
Had just settled our brains for a long winter’s nap,
When out on the lawn there arose such a clatter,
I sprang from my bed to see what was the matter.
Away to the window I flew like a flash,
Tore open the shutters and threw up the sash.
The moon on the breast of the new-fallen snow,
Gave a lustre of midday to objects below,
When what to my wondering eyes did appear,
But a miniature sleigh and eight tiny rein-deer,
With a little old driver so lively and quick,
I knew in a moment he must be St. Nick.
More rapid than eagles his coursers they came,
And he whistled, and shouted, and called them by name:
“Now, Dasher! now, Dancer! now Prancer and Vixen!
On, Comet! on, Cupid! on, Donner and Blitzen!
To the top of the porch! to the top of the wall!
Now dash away! dash away! dash away all!”
As leaves that before the wild hurricane fly,
When they meet with an obstacle, mount to the sky;
So up to the housetop the coursers they flew
With the sleigh full of toys, and St. Nicholas too—
And then, in a twinkling, I heard on the roof
The prancing and pawing of each little hoof.
As I drew in my head, and was turning around,
Down the chimney St. Nicholas came with a bound.
He was dressed all in fur, from his head to his foot,
And his clothes were all tarnished with ashes and soot;
A bundle of toys he had flung on his back,
And he looked like a pedler just opening his pack.
His eyes—how they twinkled! his dimples, how merry!
His cheeks were like roses, his nose like a cherry!
His droll little mouth was drawn up like a bow,
And the beard on his chin was as white as the snow;
The stump of a pipe he held tight in his teeth,
And the smoke, it encircled his head like a wreath;
He had a broad face and a little round belly
That shook when he laughed, like a bowl full of jelly.
He was chubby and plump, a right jolly old elf,
And I laughed when I saw him, in spite of myself;
A wink of his eye and a twist of his head
Soon gave me to know I had nothing to dread;
He spoke not a word, but went straight to his work,
And filled all the stockings; then turned with a jerk,
And laying his finger aside of his nose,
And giving a nod, up the chimney he rose;
He sprang to his sleigh, to his team gave a whistle,
And away they all flew like the down of a thistle.
But I heard him exclaim, ere he drove out of sight—
“Happy Christmas to all, and to all a good night!”

~ The Publication and Impact of the Poem ~

Clement Moore was a serious educator. His reputation and perhaps his pride would not allow him to publish an unscholarly work.

But the reading of the poem had become a tradition in his family. Beloved of his children, the poem passed to friends, one of which shared it to be published anonymously in the Troy, New York Sentinel on 23 December 1823.

As was the tradition of the time, other newspapers picked up and shared the work and the legend of A Visit from St. Nicholas grew.

Moore finally and publicly acknowledged his authorship of the poem in his own book of poetry published in 1844.

It would be reprinted around Christmas in newspapers nationwide for decades by tradition. It was known to both scholars and fans of Christmas.

The poem would have a lasting influence on the artwork of Thomas Nast, perhaps the most famous illustrator in the United States during the 19th century whose works were published before the advent of photography in newsprint.

In later years the poem would be made into children’s books, television productions, radio programs and movies.